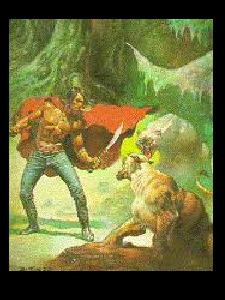 They say that the road to healing starts with admittance. And with admittance comes acceptance. For years, I remained torn between what is serious literature, as dictated by the ‘canon’, and my first true love in the world of letters: science fiction and fantasy. Granted, there are many books that fall into the latter category that also are deserving of their place on the coveted canon: Frankenstein, Dracula, The Wizard of Oz, Brave New World, 1984, Naked Lunch, and a host of others. For me, there are plenty of others; favorites that I read in middle school and later as a teenager.

My penchant for all things science fiction and fantasy carried all the way into my stint in the army. The day I arrived at basic training I carried on me a copy of Larry Niven short stories. And after I was assigned to my permanent duty station at Fort Campbell, KY I introduced a platoon mate to The Hobbit and The Lord of the Rings trilogy. I will call my former army comrade Xavier (though in all my days in uniform I never met a soldier named Xavier; likewise, anyone named Blane or Reed). Xavier was a poster child for Palooka-ism. A high school dropout from some shit hole block in the Bronx, Xavier thought that books were for rich kids, no doubt echoing his father’s sentiment; if he knew his father at all.

What Xavier really meant was that he never learned to read well. Sure, he could read an army manual; but when I was in the service I knew plenty of toddlers who were capable of comprehending those manuals as well. Xavier wanted to read, but he was afraid what others might think of him. In the 1980s, when I served in the army, every infantryman I knew carried some old paperback in his rucksack when we went out in the backwoods of Fort Campbell, KY to perform military exercises. We did this because inevitably there would be down time in a fox hole, or just outside of the fox hole, and everyone read something. Some guys read classics (one platoon member of mine spent the bulk of his enlistment reading Dostoevsky…though I don’t recommend it because Dostoevsky has a way of making you want to break with the mindless hive mentality that the army attempts to instill in young soldiers), others read what we writers refer today as genre-specific novels: westerns, crime, horror, etc.

So there was Xavier who saw a paperback copy of The Hobbit in my barracks room. “This any good?” he grunted one afternoon. “Most of the world thinks so,” I told him. Despite Xavier being possessed of the ability to beat someone senseless (think a rabid gorilla strung out on PCP pummeling you into a bloody pulp, a pulverized mess of broken bones and permanent brain damage), I never pulled any punches with him. I convinced him to borrow it. A week later, he asked if I had other books by Tolkien. Another convert, another victory…

These days I don’t know if Xavier is still reading. Hell, I don’t even know if he’s still alive. What I do know is that I exposed someone else to the life of the mind. And even if it lasted for a short time, I like to think that that Xavier became richer for the experience.

As for you, you might not read science fiction or fantasy. You might say that it’s not your thing. You might say it is escapist literature. And for you, right now, in this present moment, that may be true. Just don’t be so quick to judge, friends, before you consider this: between the fifth grade and your senior year of high school you probably read some science fiction or fantasy literature. If you were fortunate like me to attend college then you definitely read it there too. You didn’t need to torture yourself like I did as an English major (ok, it wasn’t torture…I rather liked my major, reading all of those great stories, plays, novels, and poems.), and if you didn’t you had to read something close to science fiction or fantasy if you took a survey course as part of your English requirement toward another degree. The Iliad? The Odyssey? Shakespeare’s Tempest? Midsummer Night’s Dream? The aforementioned Frankenstein? Edgar Allen Poe? The list goes on and on…