We have all seen the commercials. We are bombarded by them every day. That’s right: low testosterone. From over the counter pill form therapy (incidentally not endorsed by the Food and Drug Administration)to ads warning men that their lack of so-called sexual drive may be due to a low testosterone and that they should consult a physician. And within these ads a litany of other ailments may prohibit a guy from taking whatever pill they are pushing. Listen, if you’re taking nitrates for your heart, and I’m a writer, not a doctor, then it’s my guess that you have bigger problems than whether you’re getting it two or three times a week.

The other night I saw one of these ads while watching television with my fiancée. It used to be that I was skeeved by advertisements for catheters. For some people it’s seeing toe fungus on the screen. Call me a wacko but I can’t take the thought of using a catheter and I truly feel for those people who do. But the other night it was yet another commercial about “a condition known as low testosterone.” I am not skeeved out by the possibility of low testosterone, but it the onslaught of television ads have caused it to surpass my otherwise latent dislike for catheter commercials.

“They should just call it for what it is,” I told my other half.

She made a face, a cross between cringing and smiling as she waited for me to pontificate further. I can’t help it. I am an Irish-American. My people are blessed (or cursed) with a gift for storytelling.

“Here’s what I would do,” I said. “I would put together an ad and show what it really is. A middle-aged walks into a doctor’s office and tells his physician ‘Here’s the thing doc. I want to start banging women half my age. You got anything for that?’ That’s what these ads are saying.”

Low testosterone is not a condition per se, no more than menopause is. At the rate we are going as a society there will one be a pill to stave off death. Dying used to be a serious condition. But not any longer. But I digress.

Yes, I am a writer. And the only qualifications I have where psychiatry is concerned is that I once saw a psychiatrist for a period of time. Imagine, if you will, how devastating it was for me for my therapist to tell me, a writer, that I was sane. It was disappointing. I felt empty. I felt like I had failed. I wanted to be crazy…but this is a topic for another post.

So, here’s my suggestion for all of those guys out there my age an older: if you find yourself with a diminished sex drive, with having no energy to do the deed, then try not to fill your day with futile pursuits to stay young. In one commercial about low testosterone a man is depicted surfing (presumably in California as the sun sets over the ocean which would mean this bloke didn’t get to go surfing until he finished work that day). In another a guy looks fatigued playing basketball with his other portly friends. 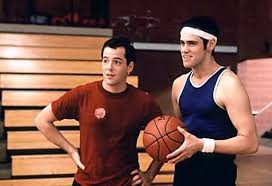 Sure, it’s a commercial. But my humble estimation is that in real life many men bother with physical activities and save none of it for the bedroom (or living room, or the garage, or the laundry room, everyone’s taste is different). And why? Because by the time we get home from work and the gym, from the evening run that we believe helps to blow off steam after dealing with high-paid morons who have no business running a business much less being trusted to tie their neckties in the morning, we are pooped. Sorry, babe. I am tired.

Most guys reach a certain age and all the mirrors in their homes turn into fun house mirrors, distorting the real image looking back at them. So how do we cope? We rent porn. We drink. We smoke. We eat shitty foods because we were emotionally arrested somewhere in our teens due to some calamitous situation that we can no longer recall. We flirt with that 20-something dipshit at the office whose annoying voice is negated by her voluptuous build. We contend with significant others our own age who become infatuated with movie star hunks twenty years younger than us and in our twisted, manly logic we justify affairs, prostitutes, and lots worse. None of this has to do with low testosterone, the so-called mid-life crisis. It’s not a crisis. It’s nature. Everyone gets old. It’s not a condition. It’s called biology. But we pretend that we are still 25 years old because society expects it of us; only, just as when we were that age, it’s laughable to 25 year olds everywhere.

I am not denying the importance of regular check-ups to include blood work to ensure one’s health. You might think that some guys have all the luck, and for the rest there’s erectile dysfunction. But life is never that polarized. Ask yourself as you get older what’s most important. If your answer involves landing that annoying 20-something dipshit at the office then these words have fallen on deaf ears. But if you have problems with diminished performance during intimacy try leaving the gym early. Try cutting your run in half. And look in the fun house mirror at home and ask yourself “Am I a professional athlete? Am I going to the Olympics?” If the answer is no then go home early and surprise your partner. You may not have a “condition” at all. And you damn sure won’t need medicine to fix what ails you.

Ok, so maybe it’s not brand-spanking new. My baby is a week old in print (and available on Kindle too!). This novel of mine was a labor of love from start to finish, through several drafts. The premise is as follows:

In Little Flower of Luzon, Felix Hart always maintained troublesome relationships with women. So when he meets Malaya “Memeng” Cortazar, a beautiful Filipina teen, he thinks his relationship problems are solved. Felix becomes consumed by Memeng who is half his age.

As he courts the young Filipina, Felix encounters several obstacles, including his overbearing mother, his pop-psychology-spouting older brother, and his meddlesome ex-girlfriend.

Memeng and Felix are sure of the connection they share, but their bond is threatened when they discover her late mother’s family secret.

Much obliged. And do let me know what you think. Please visit my Facebook page: