One of my earliest memories is a weekend that my mother and my father hired a babysitter to watch my siblings and me while my parents went away on vacation. Last year, I told my mother that I remembered the babysitter appeared like a giant next to a wall sconce light in the bedroom I shared with my brother. My mother told me I couldn’t have possibly remembered that since I was only three years old.

Be that as it may, that night felt like an eternity.

I suppose it’s natural to recall memories when we lose a parent. My father had died when he was fifty-three years old. My mother was eighty-one years old. When my father passed away I was a nineteen-year-old kid in the army for just eight months. I was in the woods somewhere on the outskirts of Camp Grayling, a national guard training facility. My unit had flown there to play OPFOR, or the opposing force, against the Michigan National Guard. I don’t remember much, but I do remember the day I got the news. It was raining and everyone was miserable. My mother had contacted the Red Cross, and the Red Cross in turn got a hold of my unit, etc, etc, until I was approached by my company commander who, rumor had it, was some sort of college track and football hotshot, but he couldn’t compose a sentence to save his life. This handicap was made even more difficult as I listened to him stammer through the message. My father was dying. I needed to get home.

After my father was gone, I became very angry. At forty-seven years old, I can look back now and realize that the source of my anger was loss. I felt cheated. It’s human nature. Through my stint in the army and the ensuing years prior to my thirtieth birthday I drank. I drank a lot. When I did drink I had grand visions of dying and going after my father. It was foolish. There was nothing in the world that mattered. Sometimes I would see other guys, young adults like me at the time, with their fathers and anger possessed me to the point where I couldn’t see straight.

Throughout this time my mother never wavered in her campaign about faith; not your typical holy roller hallelujah type of faith, but the other kind. Yes, she believed in God. Yes, she believed in Jesus Christ as the Word made flesh, born unto a virgin, and the rest of it. But in her way she told me all the time that I just had to have faith.

That my drinking made life a living hell for everyone who knew me is no surprise. That’s what alcoholism does to you. Fast forward a few years, and I ended up in rehab. It was there I heard a priest break addiction down on several planes—biological, mental, and spiritual—and what that priest said eventually opened a door for me. In essence, we develop a hole or a void in our souls. Those prone to addiction, the priest said, tend to fill that hole with alcohol and drugs and other addictions. He also talked about how recovery was selfish, that the recovering alcoholic must continue to do one thing that he did while drinking: continue to think only of himself.

So, earlier today my siblings and I met at the hospital where my mother lay in ICU, having battled cancer, suffered one round of chemo therapy that wiped out her immune system, and subsequently ended up with an infection that was treated with antibiotics and dialysis after my mother’s kidneys and liver were discovered to be not functionally properly because of the infection. Ultimately, my mother succumbed to multiple organ failure. We stayed with her until the very end. My mother’s nurse came to the bedside, checked my mother’s pulse and listened with a stethoscope for a heartbeat. Afterward, the nurse told us “your mother’s gone home.” We stayed on a little longer after that.

Before leaving the hospital, I looked out the window of her room. It had been cloudy after some morning summer storms, but the sun was out. Memory has an odd way. In that instant, as I looked out the window, I remembered a day when I was in the first grade and I wanted to walk home from school with some boys I knew. I only made it half-way there when my mother came walking up the street to meet me. I was pretty sore about not being able to walk home by myself. But eventually my mother found enough faith to let me do so.

Today, hours after my mother passed from this world, I find myself thinking more and more about the past. I suppose it’s a defense mechanism. Right now, I sure as shit don’t want to think about the future without her. So, I think about the past. And I recall odd bits of history and myth concerning beliefs in the afterlife, not just the Catholic faith I was brought up with, but much older ones. For instance, I remember reading in some old book about ancient Celts who believed in only a finite number of souls. When a person died they got to come back. Pre-Christian Celts celebrated death and birth in much the same fashion, I guess; though there’s no hard evidence to support this other than the histories written by their conquerors which, as my mother used to say, leaves a lot to be desired.

Out of all this I am trying to build a base by which I can cope with the loss. It may work. It may not. In truth, none of us know definitely if there’s life after life. It is an age-old question; one that has haunted us ever since we climbed down from trees, crawled out of caves, or were expelled from the garden, depending on your personal outlook. What I do know is my mother’s independent spirit. In the years after my father’s death she became quite adept at fending for herself. For instance, she never had a driver’s license. But when my father died she knew there was no other choice.

Two days before she was hospitalized a week ago, my mother took herself out to breakfast. It was an indulgence that became quite frequent as she grew older. A few days before that, my mother and I talked about the perennial question: what comes next after life. My mother told me in no uncertain terms that she was not afraid. Maybe she knew what was coming down the pike, to use another phrase of hers. Or maybe, just maybe, she saw in her own way that her children were grown, that some of us graced her with grandchildren, and a few of those grandchildren graced her with great-grandchildren. Or maybe she missed her sisters and her brothers. Whatever the case, it was that conversation, more than the patchwork belief system I was building over the years, that solidified the base I am building in order to cope.

My mother once said that saying a Hail Mary may not put a ton of money in your lap, but it will sure give you peace of mind. She knew better than most the power of faith, and the deep mystery that went along with it. 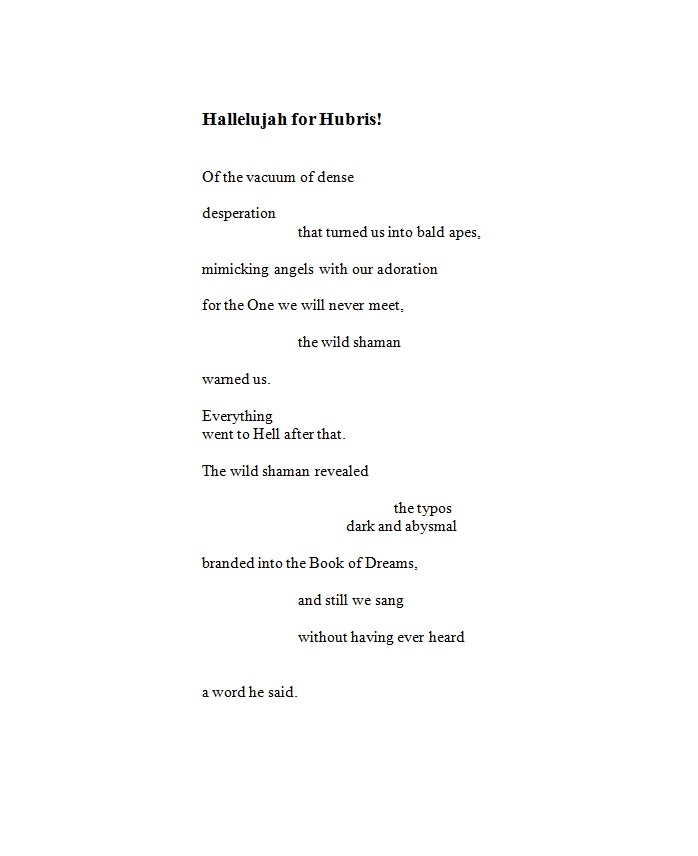 Please be sure to drop by the Tupelo Press 30/30 Project, read some good poetry, and donate today. Support this non-profit publisher dedicated to bringing you contemporary poetry and literary fiction. Donate!