The conventional notion of patience is to be very kind and wait and hold your temper, repressing your restlessness…The bodhisattva, on the other hand, free from the compulsive concern with time, can just sit patiently without feeling that he is “waiting” for something else to happen.

~Chogyam Trungpa, The Myth Of Freedom
* * *
Is there a personal Devil? This is more or less the same question as whether there is a personal God. If God, being much greater than we can imagine, is not ultimately personal but is capable of relating to us as persons, something more or less similar is probably true of the great downward force portrayed as the unholy trinity of “the world, the flesh, and the Devil.”…We may fear the Devil and struggle against him, but without him we would not be what we are.
~Richard Smoley, Inner Christianity
* * *
“My friend, I still want to be a gentleman, and to be accepted as such,” the visitor began in a fit of some sort of spongerish, good-natured, and already-yielding ambition. “I am poor, but…I won’t say very honest, but…in society it’s generally accepted as an axiom that I am a fallen angel. By God, I can’t imagine how I could ever have been an angel. If I ever was one, it was so long ago that it’s no sin to have forgotten it…”
~Fyodor Dostoevsky, The Brothers Karamazov (trans. Pevear and Volokhonsky) 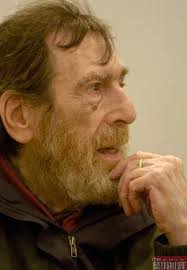 “Sometimes they have been said to inspire a man to do/more with his life than he might have./But what is there for a man to do with his life?” –Russell Edson from his poem Angels in The Tormented Mirror
* * *
Saw this in a notebook of mine from 2008:
“…uses grammatically correct asshole sentences…” (actual words spoken by a man in a mall. don’t know context, but the cadence caught my attention)
***
Flirting with idea of giving up writing and going back to painting…which got me thinking about Yeats for some reason:
The best lack all conviction, while the worst
Are full of passionate intensity.
****
A typo from Facebook: “He loved a very rough life.”
***
A typo of mine recently: Jesus Christ never shuts the fuck up.
* * *

s long as we follow a spiritual approach promising salvation, miracles, liberation, then we are bound by the “golden chain of spirituality”. Such a chain might be beautiful to wear, with its inlaid jewels and intricate carvings, but nevertheless, it imprisons us. People think they can wear the golden chain without being imprisoned by it, but they are deceiving themselves. As long as one’s approach to spirituality is based upon enriching the ego, then it is spiritual materialism, a suicidal process rather than a creative one.

The Myth of Freedom and the Way of Meditation