This week marked my first week as an adjunct English professor teaching English composition courses at two area colleges. Two things I learned this week: Among the 70 students I have between these two schools, there’s not one English major. The other, all of my students agreed that their school system has failed them.

We talked some about the reasons why they are in school. Some want to get degrees and do something worthwhile. Others are there finding themselves (by their own admission). And still others are there because it is what their parents told them they are going to do. A small contingent in each class lowered their heads and mumbled their discontent when I spoke about how some have no choice but to pursue the profession their parents have picked for them.

Among my students, I like to think that there are dreamers, artists, budding writers, musicians, singers, songwriters, and the like. And there very well may be. But the truth is this last group, those whose future has been sorted out for them, seem the most lost among the students I have the privilege of teaching. Sure, they will exposed to new ideas, different ways of thinking, some good and decidedly bad writing in all of their courses, and not just during peer review work, but reading textbooks and essays and the like.

My job, as it was explained to me by my bosses, was teach students how to write academic papers, perform research, think critically, etc. What I told my students this past week was decidedly different. My job, as someone much more wise than me once said, is to take them out of their comfort zones, bring them into the unknown, and by the end of the semester they will bounce back toward their old comfort zones, but not end up in the same place as before the semester started.

One of my classes, smaller than the other two, let out a collective moan when I introduced the book of poetry we will study later in the semester. And since the campus is nestled in a nice little section of working class Philadelphia I thought what better poet to introduce them to than Russell Edson.

But, but…what does poetry have to do with academic writing? I can see it in their faces. How will this help me become a nurse? An engineer? A physical therapist? A lawyer? A doctor? A software engineer?

In my humble estimation, it has to do with becoming more attuned to the human condition, to sharing that sacred moment of self-discovery the poet experiences, and to contemplate not what is said in a poem but everything that is not.

Yeah, but…why poetry? The question arose last week. All of my students sitting as far back in their seats as humanly possible; arms locked across their chests as attempted to shield themselves from whatever it is young students shield themselves from these days (I suspect the same things I did at their age once upon a time). Because, I told them, it has to do with language. It has to do with written language being a relatively new thing in the history of human beings. A few of them uncrossed their arms. Because it has to do with the power of words, and the effect various words have on each of us. This was the part where they leaned in closer to listen as I stood talking with them. Because, I told them, whether you believe it or not, words by their very origins have an effect on us on a subconscious level; or, more to the point, sounds have that effect. We are, after all, verbal creatures, I said. Storytellers, if you will. And no matter where your ancestors came from, everyone shares that. The power of words and their meanings, the sound of words handed down through the centuries; incantations pure and simple. And then class was over for that day.

My students may think I am crazy. And maybe I am. But I believe poetry can contribute to everyone’s lives; regardless of ethnicity, political leanings, and socio-economic background. Why more people don’t read poetry, I think, has to do with how we are all part of the instant gratification society. It’s as if something is wrong with us if we don’t want now. Poetry is often looked down upon not because it is some antiquated form of expression; no, it very much alive; but because people will cast poetry aside if they “don’t get it.” What I want for my students, at least for those two weeks when I teach Edson, is to pause long enough and forget about the gimme-gimme-gimme mentality. If I can get them to do that, for a just a short time, then maybe when they’re older they will look back and think ‘that was kind of cool.’ I just hope I don’t let them down.

There are 18 days left until the election. Tempers are flaring, people on both sides of the political fence are chomping at the bit, desperate to have their voices heard, to exercise their right as citizens to vote in a democratic and free election, to see their candidate in office, to turn the tide of our collapsing economy, to ensure that America rises from the ashes of the ruin it has become (ok, this might be a bit harsh); more now than ever before we are sick and tired of being bombarded by multi-million dollar ad campaigns, of neighbors turning vicious over silly signs in yards, of friends deleting friends on Facebook over liking a candidate’s page; anger and resentment fill our days and nights, talking points have become sacred texts we regurgitate on social media; and for all of this, when we close our eyes, we can feel it: the center will not hold. It is an exciting time in history, but this blog, today, is not about that.

I should preface this by saying my 12 year old son put me up to this. One day we were watching Ancient Aliens on the History Channel and this guy popped up on the television screen: 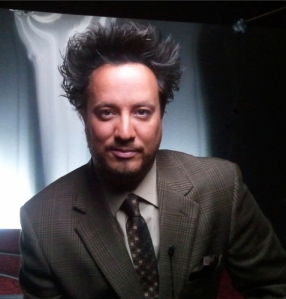 My son and I watch this program from time to time, duped into the various episodes; never allowing for one cold hard fact: proof positive of extraterrestrial intelligence would make headlines news around the world; or as one scientist, whose name escapes me now, was quoted as saying: show me the UFO muffler that falls out of the sky and I will believe.

So, there we were last week, watching yet another episode of Ancient Aliens. Mr. Tsoukalos appeared on the screen and I mumbled something about his hair. To wit, my son chided me: you should write about that in your blog.

“Did human hairdressers create that look?” I said, invoking the narrator’s voice from Ancient Aliens. “Or was there some outside perhaps otherworldly influence involved?”

I mean no disrespect to Giorgio Tsoukalos; nor do I mean to mar the good name of History Channel’s Ancient Aliens. Sometimes, it takes children to force us to take a moment to breathe, to forget the ills of the world, to pull us out of our own heads and see what life is really worth. And if I have offended UFO and alien enthusiasts, or the over 57,000 diehard Twitter followers of Mr. Tsoukalos, by poking fun of that anti-gravity hairdo (to say nothing of the Mangerine tan he sports), then I offer my most humble apologies.

My intention was not misbegotten. If in reading this post you forgot about the political morass that is the 2012 Presidential Campaign for the minute or so it took you to read this post, then my work is done.