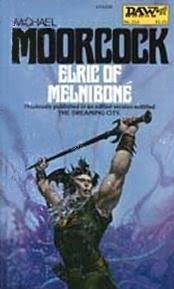 So, recently I read on Facebook that over at Tor.com a blog by Karin L. Kross  describes rereading Elric of Melnibone by Michael Moorcock. My local library picked up on the blog and provided a link to it via their Facebook page. As fantasy books go, I read Elric more than once when I was young. The same for the rest in the series.

This cycle of stories I loved so much that (nerd alert, alert, nerd alert!) I even packed up the old two-volume Science Fiction Book Club set I had and brought it with me when I served in the army. Don’t get me wrong. I wasn’t a complete lunatic about the whole thing. It’s not like I carried them around in my rucksack during basic training; though I suspect that I may have tried.

In the mid 1980s my drill sergeants were all about confiscating contraband: from weed to Walkmans, from liquor to nudie magazines. Had I actually smuggled in the Elric Saga I don’t know what they would have made of the albino king and his black sword Stormbringer. So, I waited until I arrived at Fort Campbell, KY, home of the Screaming Eagles, and soon had my hardbound 2-volume set proudly displayed in my barracks room.

It was Elric the Albino King and other fantasy novels that led me to write my first novel as a teenager. I was maybe fifteen years old. Reading Elric of Melnibone made me understand, at least as much as a fifteen year old boy can, what with the hormones rioting in my body like gangs at the Five Points in 19th century NYC, that a well-rounded main character was also a vulnerable one. By the time I was fifteen I had read most of the assigned books to me in school: A Separate Peace, The Outsiders, and a slew of other realist fiction novels. But science fiction and fantasy (and horror too) were my secret addiction. In school, I couldn’t wait to get home and read Elric or The Hobbit or any other paperback I could get my hands on. I was a teenage junkie in that respect. And despite being a self-avowed sci-fi fantasy nerd, I managed to go steady with a girl or two. No, they weren’t from Canada. And no, they weren’t make-believe. But that’s a story for another time…

So, I deliberated for weeks about how to best approach this story. There were only so many story lines I knew. The plot I settled on for my first attempt was this: space-faring team of men crash-land on a planet whose indigenous race was not technologically advanced. The people were more akin to the Ancient Greeks or the Romans. Their native religion heralded the arrival of some messiah to save them from the oppressive dictator that made their lives miserable.

Yes, it was old-hat even by late 1970s/early 1980s standards as plot lines go. Add to this predictable story line another familiar twist: one of the stranded astronauts is mistaken for the so-called messiah. Not because his advanced gear makes him seem magical. He didn’t heal anyone; ditto for exorcising demons. The rest of his crew? Sacrificed by the evil dictator’s henchmen. I needed them out of the way so the main character could develop a relationship with the lead female character, the free-spirited, intelligent daughter of the tyrant. Throw into this mix a roaming horde of omnivorous locust-like insects that consumed everything in sight. Why? I remember thinking about the running of time option in the story.

Ultimately, I abandoned the story because

1. the omnivorous insects would have consumed all life on the planet I had created within six chapters.

2. I was falling madly in love with a girl I knew since childhood (she was going to be a ballet dancer. I was going to run a karate school. Never mind that she couldn’t dance and I had never taken a formal karate lesson in my life. It was love, damn it.).

3. other stories came into mind that sparked my interest more than the ill-fated space-faring, messiah, human sacrifice, flesh-eating insect, love story I wanted to portray.

But not necessarily in that order.

Oddly, this brings me back to Elric of Melnibone, the albino king. For years afterward, I struggled with trying to write some sword and sorcery novel or another, but eventually gave up hope. Not because I don’t think I couldn’t have written one. It had more to do with all of my work at that time coming out like some retread of Conan the Barbarian, Elric, The Lord of the Rings, and others. As a young impressionable writer, I was in awe of these tales; but I felt as if I couldn’t add anything unique to a story tradition that goes back all the way to Beowulf.

These days, things are different. I have a story brewing that may be worth something. But first, before I delve too deep into such a project, I need to revisit Elric of Melnibone and seek counsel. It has been a long time since I maneuvered the complicated sea-maze that protects the Dragon Isle. Anyone who wants to come with me is welcome to do so.